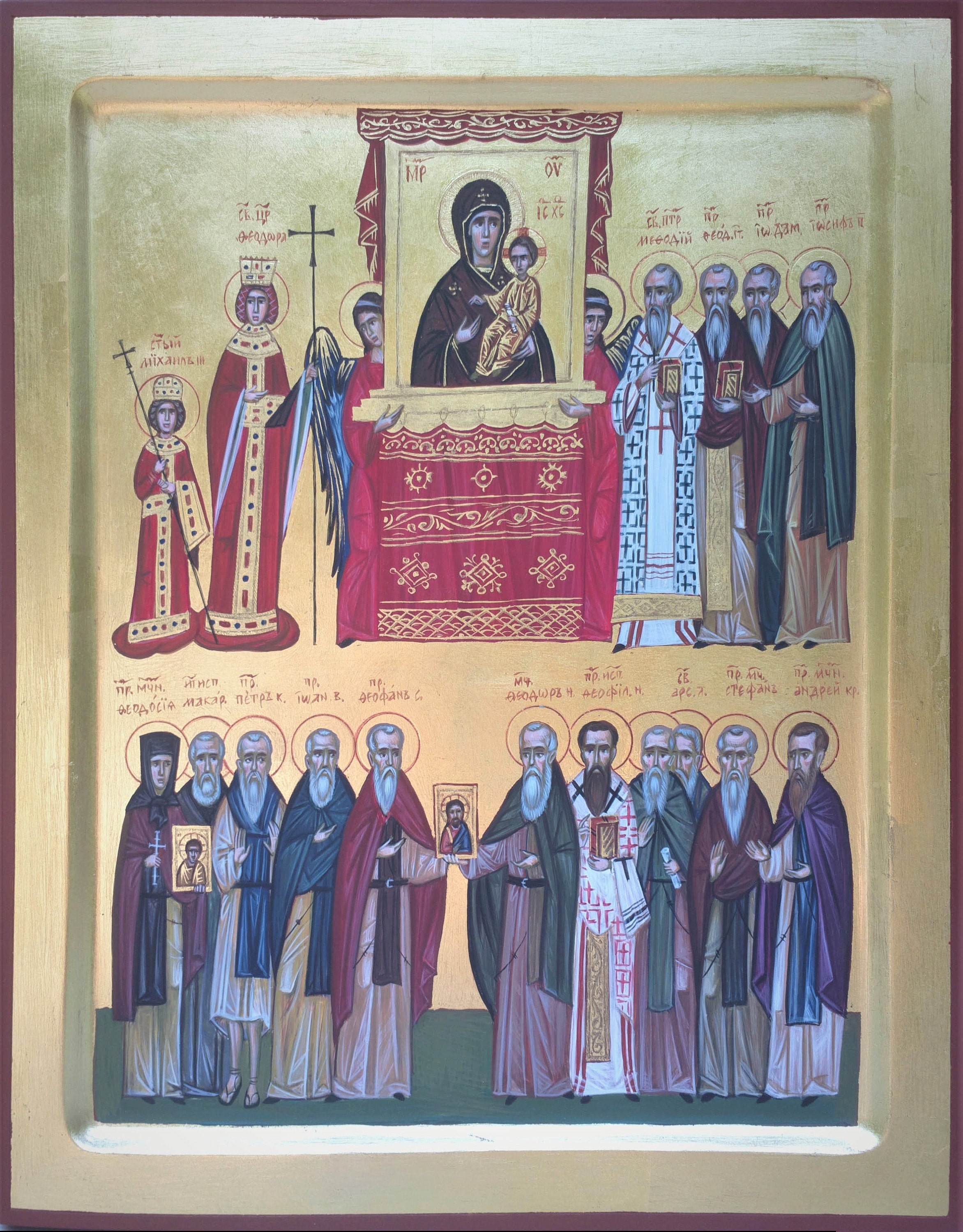 The Icon of the Triumph of Orthodoxy (also known as the Icon of the Sunday of Orthodoxy) is the festal icon for the first Sunday of Great Lent, a celebration that commemorated the end of Byzantine Iconoclasm and restoration of icons to the church in 843.

The earliest known depiction of this subject thought to have been painted in Constantinople, capital of the Byzantine Empire. This icon was purchased by the British Museum in 1988. The dimensions of the icon are: height: 37.8 cm, width: 31.4 cm, depth: 5.3 cm.

The icon tells about the end of the period of iconoclasm. For half a century there has been a debate about whether Jesus Christ, the Mother of God, the Saints can be depicted and we can pray in front of these images? This dramatic period in church history ends with what we call the Triumph of Orthodoxy. 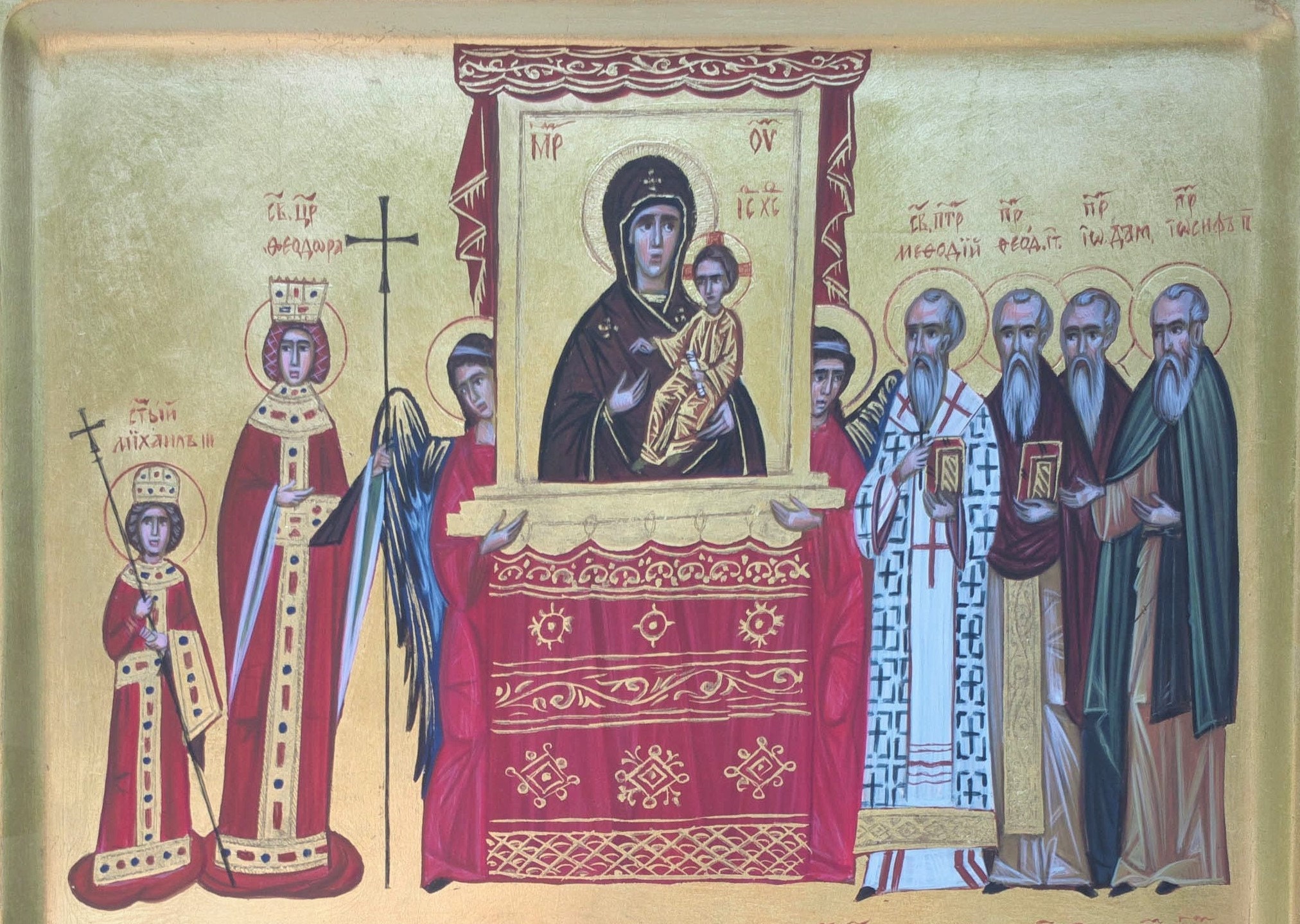 In the center of the iconographic composition is the Odigitria (Hodegetria), the icon of the Mother of God (Guide), which was commonly believed to have been created by St Luke and who was revered as the patroness of Byzantium. The throne on which the Icon is placed shows us that the icon is a liturgical image, and it participates in the liturgy. It is the celebration of the victory of the iconodules over the iconoclasts by the decision of the Seventh Ecumenical Council.

The icon of Hodegetria is being held up by two angels while to the left stand Empress Theodora and her son Michael III. To the right of the Hodegetria are Patriarch Methodios, Bishop Theodore, and two monks. This suggests the event оn March 11, 843, in the temple of St. Sophia where Patriarch Methodios, Empress Theodora and her son Michael III, pray in front of the icon of the Holy Mother of God. Аfter the prayer, there was a  triumphant procession that was made on Sunday, from the Church of the Theotokos in Blachernae to Hagia Sophia, and the believers have returned the icons preserved by them in the temples. 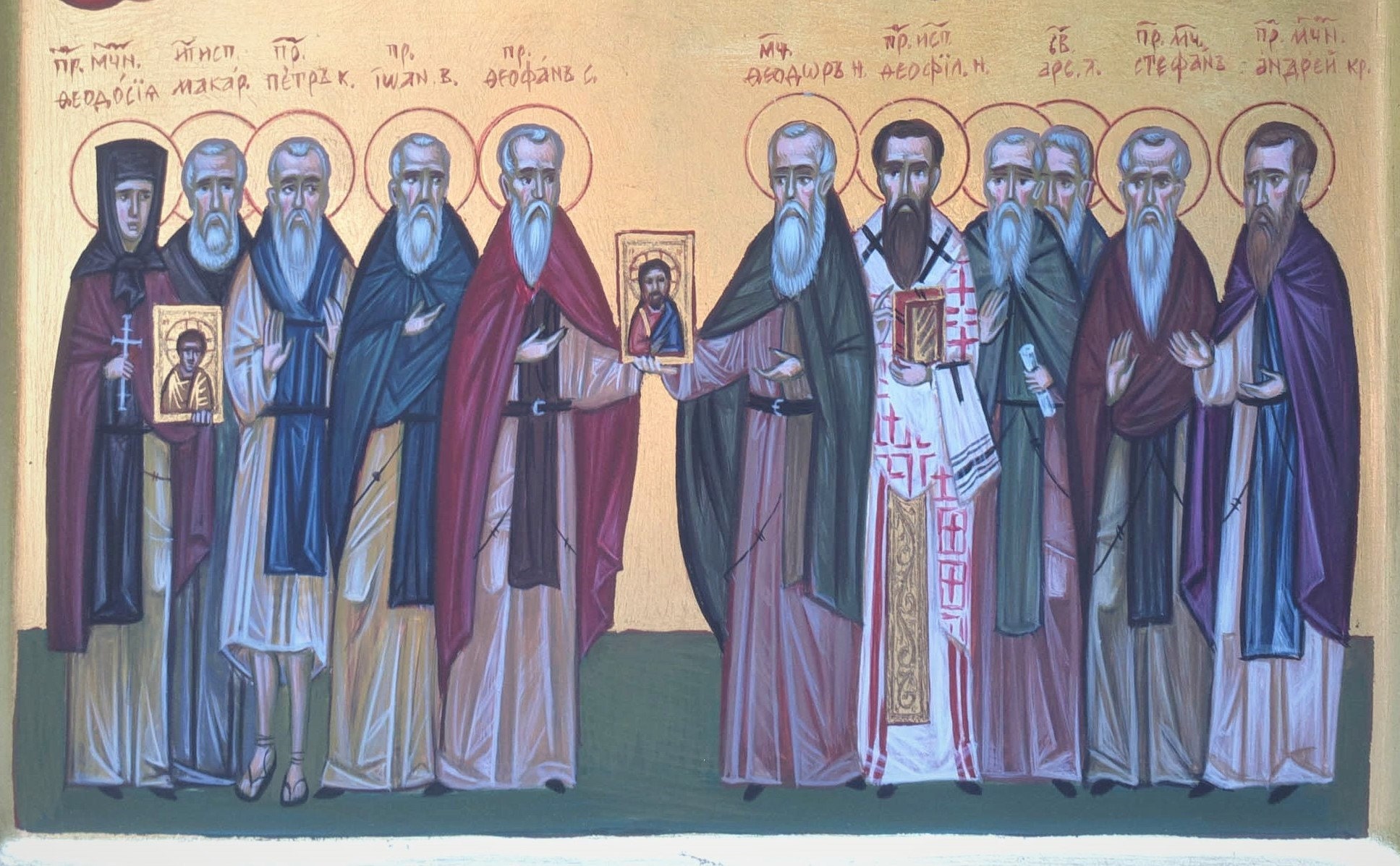 Beneath them are 11 saints and martyrs. Just below the Hodegetria is Theophanes the Confessor and Theodore the Studite jointly holding an image of Christ. To the far left is Saint Theodosia, the only female saint, holding an icon of Christ-Emmanuel. The fourth figure from the left, right behind Theophanes the Confessor, is identified as Saint Ioannikios. On the right, behind Theodore, the Studite stands a bishop identified by his garb while right behind him stand the brothers Theodorus and Theophanes Graptoi. The last two figures are identified as Saint Theophylaktos and Arsakios. Though they are all depicted together, many of them were not contemporaries.

In the upper row of the icon, we see the images of the participants or their contemporaries killed in 843.

The second line depicts saints who defended icons and icon-worship during the iconoclast period.