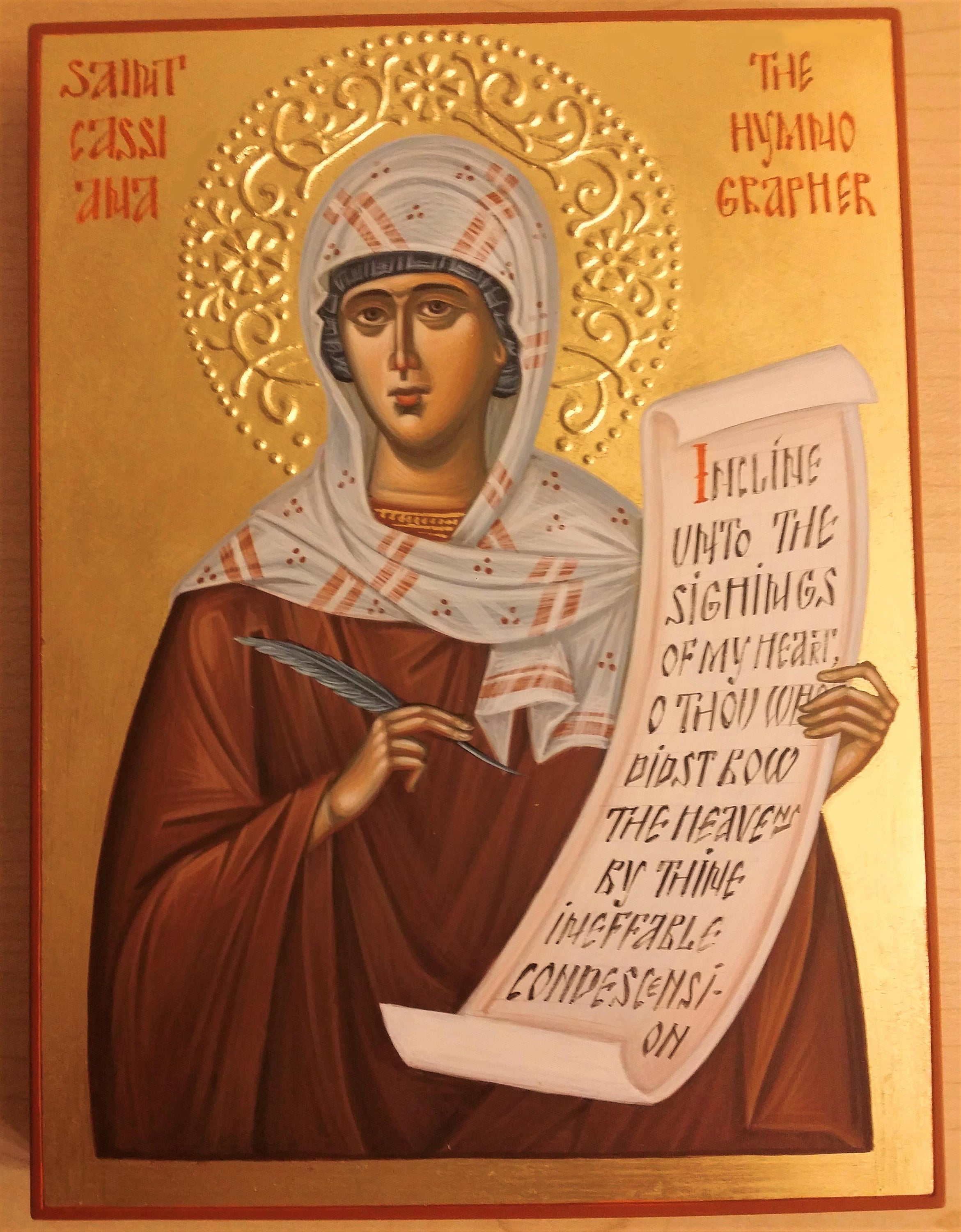 St. Kassia was born in Constantinople around 805,  into a wealthy family and She had remarkable intelligence and education. Many Byzantine authors mention her poetic talent. In Greek manuscripts are preserved a significant number of her hymns, sermons, and speeches on various topics in poetic form. Almost all of them have been published by modern scholars, but have been completely translated into English only. The chronicler George Codinos, describing ancient Constantinople, mentions the Ikasa Monastery, which was founded by the nun Kassia. The monastery is near the monastery of St. Dia, in the valley of the river Likos (now the river has completely disappeared, due to which the location of the monastery is difficult to determine). Three Byzantine chroniclers, Simeon Magister, George the Monk, and Leo the Grammarian, claim that she was one of the participants in the "duel" for choosing a husband of Theophilos (a common practice in Byzantium in the ninth century), organized by his stepmother, the widowed Empress Efrosi. . Among the selected girls are Kassia and Theodora. Theophilus, struck by the beauty of Kassia, to test her mind and character, addressed her with the words of St. John Chrysostom of the Annunciation "Through the woman evil was poured out on the earth!"

Demonstrating his mind and education, Kassia responded by continuing with the quote "But through women are the sources of good." Apparently, Kassia, who had already decided to become a nun at the time - this can be seen from the three surviving letters to Theodore Studitt, her spiritual mentor - deliberately said this phrase so as not to be chosen as the wife of the future emperor. Theophilus understands the meaning of the answer and gives the golden apple of Theodora.

When next we hear of Kassia in 843 she had founded a convent in the west of Constantinople, near the Constantinian Walls, and became its first abbess. Although many scholars attribute this to bitterness at having failed to marry Theophilos and to become Empress, a letter from Theodore the Studite indicates that she had other motivations for wanting a monastic life. It had a close relationship with the nearby monastery of Stoudios, which was to play a central role in re-editing the Byzantine liturgical books in the 9th and 10th centuries.

Emperor Theophilos was a fierce iconoclast, and any residual feelings he may have had for Kassia did not preserve her from the imperial policy of persecution for her defense of the veneration of icons. Among other things, she was subjected to scourging with a lash. In spite of this, she remained outspoken in defense of the Orthodox Faith. 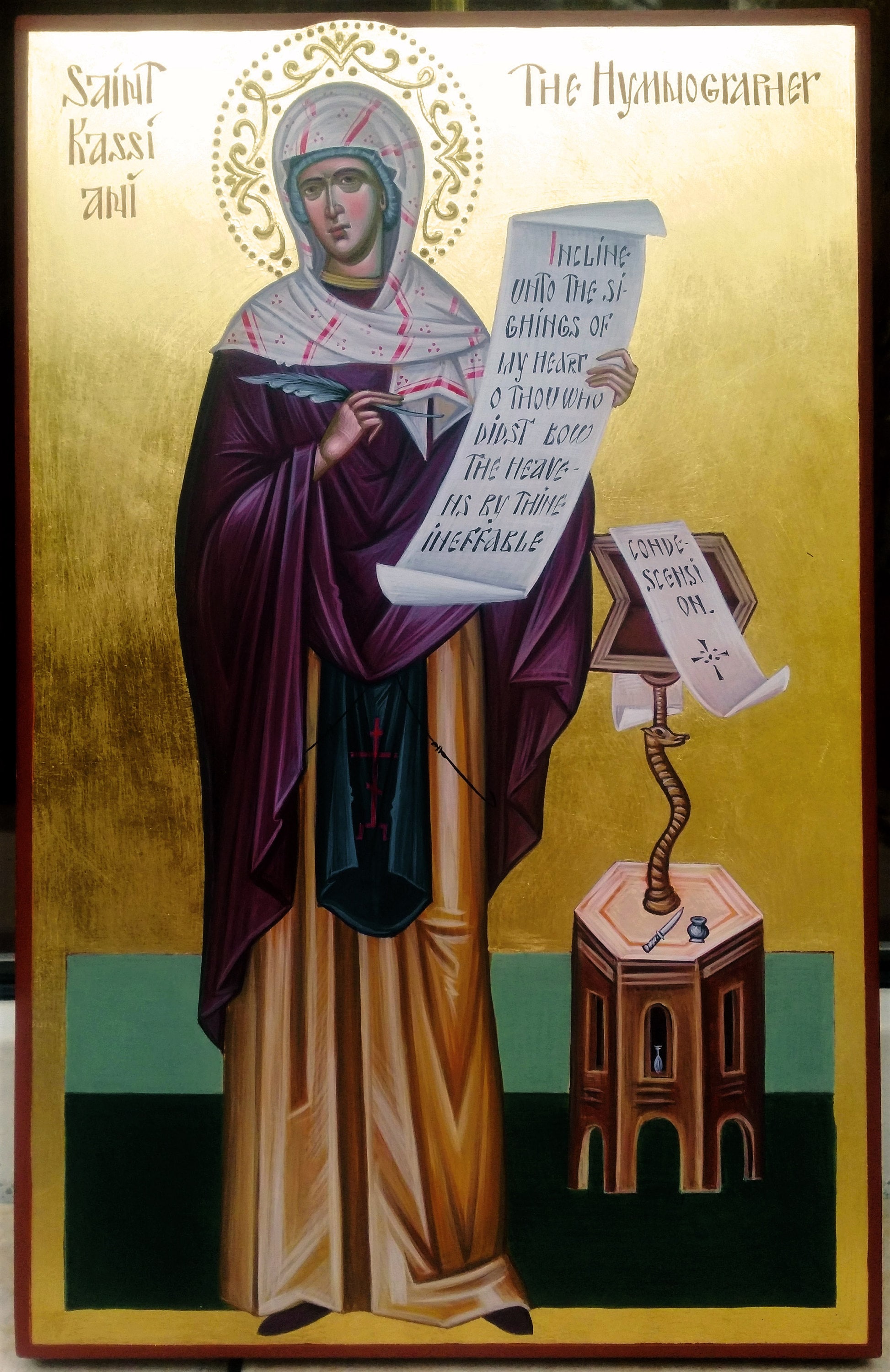 The content of the works of Rev. Kassia shows a deep knowledge of St. Scripture and its theological mind.

In addition, we can add about 789 preserved non-liturgical verses, many of which are epigrams and aphorisms called "instructive verse." The main themes are the opposition of good and evil, cause and ignorance, generosity and greed, true friendship and hypocritical friendship, poverty and wealth, generosity and stinginess, the praise of various virtues, denunciation of vices.

St. Kassia knew not only the Holy Scriptures and the works of the Holy Fathers but also the Greek philosophy and the secular works of the ancient writers. Some of her epigrams contain paraphrases of Plato's works.

The most famous of her compositions is the eponymous Hymn of Kassia (also known as the Troparion of Kassiani), which is chanted each year at Matins on Holy Wednesday (which in usual parish practice is sung Tuesday evening) at the end of the aposticha.

After the death of Theophilos in 842 his young son Michael III became Eastern Roman Emperor, with Empress Theodora acting as Regent. Together they ended the second iconoclastic period (814-842).

Kassia traveled to Italy briefly but eventually settled on the Greek Island of Kasos where she died sometime between 867 and 890 CE. In the city of Panaghia, there is a church where Kassia's tomb/reliquary may be found.

Previous Post Nicholas Salos of Pskov, Blessed Nicholas of Pskov the Fool-For-Christ
0 items in your cart