Nicholas Salos of Pskov, Blessed Nicholas of Pskov the Fool-For-Christ 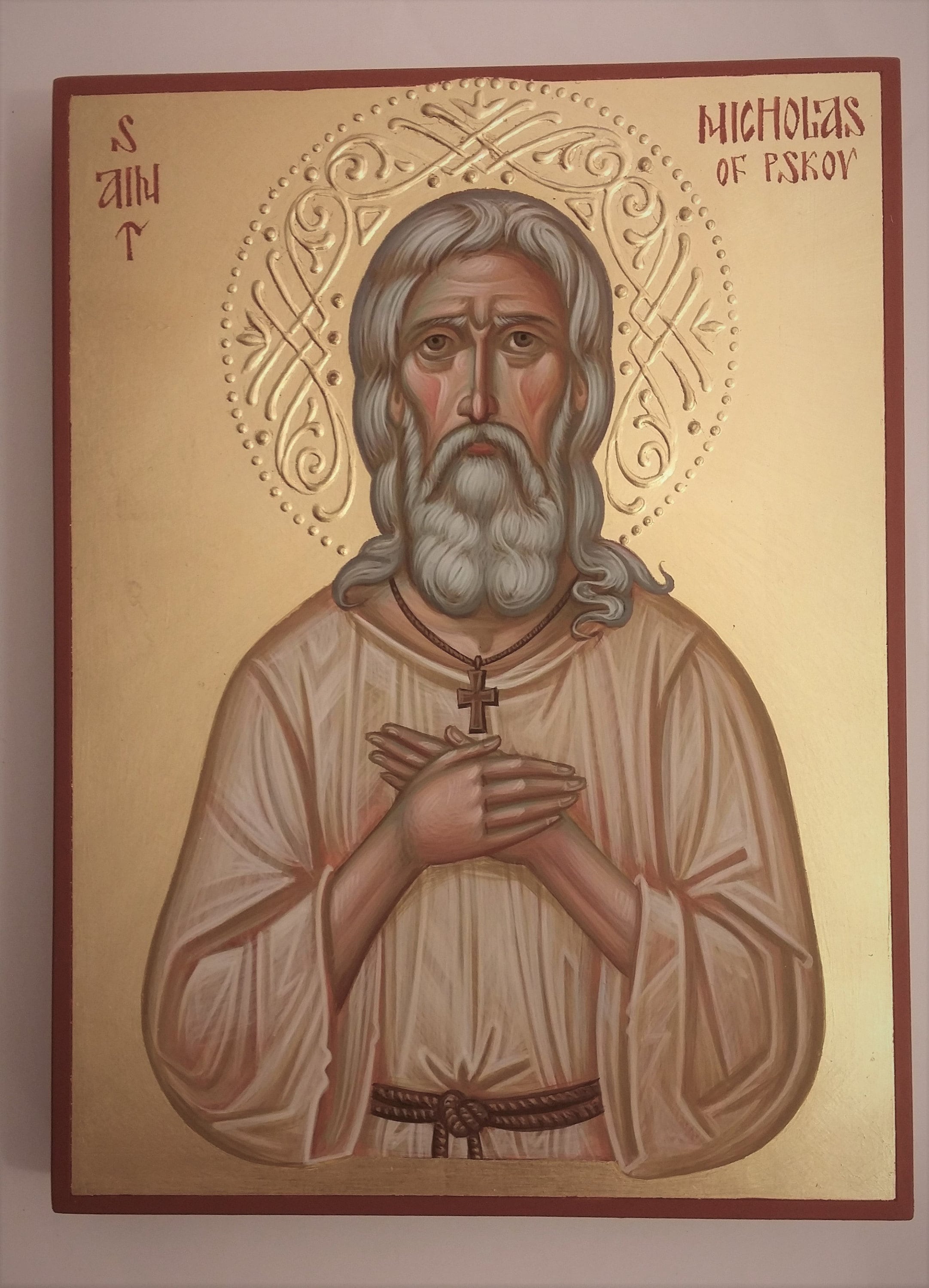 Blessed Nikolai of Pskovsky carried the feat of a holy fool for more than three decades. Long before his death, he acquired the blessed gifts of the Holy Spirit and was awarded the gift of miracles and prophecy. Pskov contemporaries called him Mikula (Mikola, Nikola) Sallos, which translated from Greek means "blessed, holy fool", and during his lifetime they revered him as a saint, also calling Mikula Saint.

In February 1570, after a devastating campaign against Novgorod, Tsar Ivan the Terrible moved with his army to Pskov, suspecting treason.

Chronicle testifies, "the king has come ... with great fury, like a roaring lion, although to tear innocent people to pieces and shed much blood."

Hearing the bell ringing for Matins all over Pskov, the tsar, said to his soldiers:" Blunt your swords upon the stones, let the murders stop ".

The king ordered to catch the holy fool, but he became invisible. 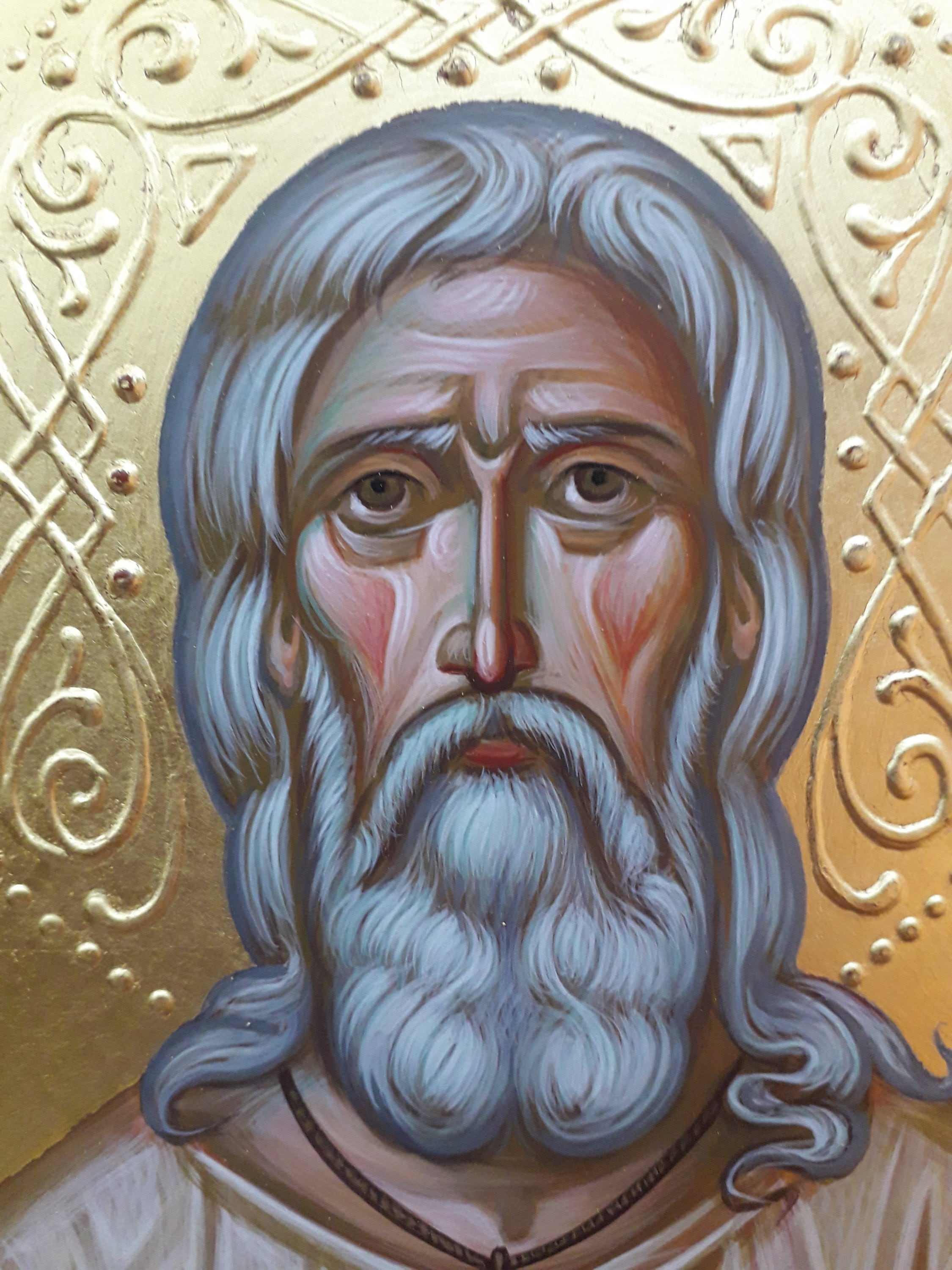 Though he had forbidden his men to kill, Ivan still intended to sack the city. The Tsar attended a Molieben at the Trinity cathedral, and he venerated the relics of holy Prince Vsevolod-Gabriel and expressed his wish to receive the blessing of the holy fool Nicholas.

The saint instructed the Tsar “by many terrible sayings,” to stop the killing and not to plunder the holy churches of God. But Ivan did not heed him and gave orders to remove the bell from the Trinity cathedral. Then, as the saint prophesied, the Tsar’s finest horse fell dead...

Frightened by the fulfillment of the saint’s prophecy and denounced for his wicked deeds, Ivan the Terrible ordered a stop to the looting and fled from the city. The Oprichniki, witnessing this, wrote: “The mighty tyrant ... departed beaten and shamed, driven off as though by an enemy. Thus did a worthless beggar terrify and drive off the Tsar with his multitude of a thousand soldiers.”

Prayer and the word of the blessed one awakened the king's conscience. Frightened by the fulfilled prophecy and convicted of atrocities, Grozny, having ordered to stop the robbery, fled from the city. The guardsmen, witnesses of this, wrote: "The mighty tyrant ... left beaten and ashamed as if driven away by the enemy. So the poor beggar frightened and drove away the king with many thousands of soldiers."

Blessed Nicholas died on February 28, 1576, and was buried in the Trinity Cathedral of the city he saved. Only the Pskov princes and, subsequently, the archpastors were honored with this honor.

Blessed Nicholas of Pskov, who was “a holy fool in the flesh, and by assuming this holy folly he became a citizen of the heavenly Jerusalem” (Troparion). He also “transformed the Tsar’s wild thoughts into mercy” (Kontakion).

Previous Post Martyr Asterius the Senator at Caesarea, in Palestine
Next Post Saint Kassia the hymnographer
0 items in your cart