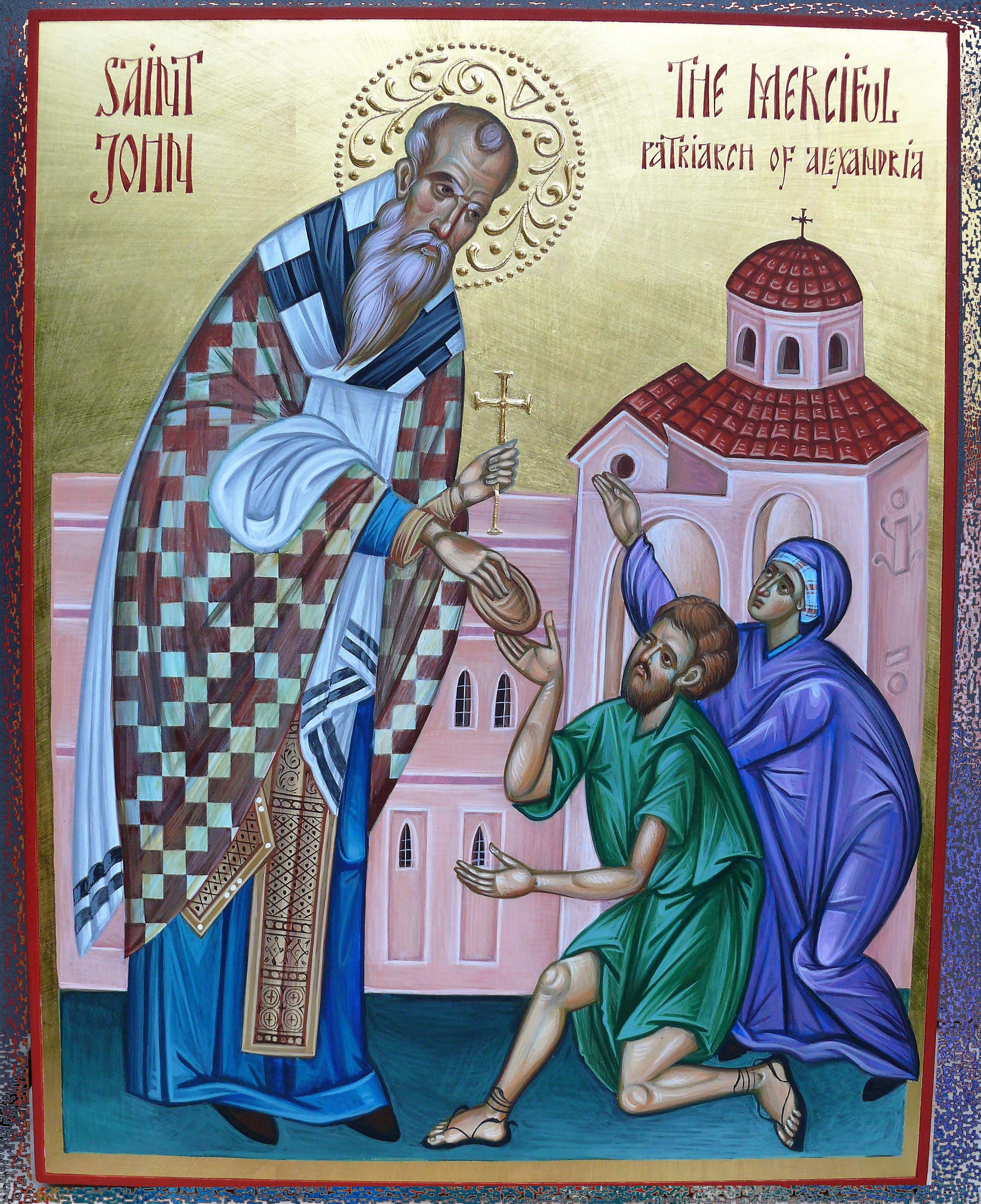 Saint John the Merciful was a patriarch of Alexandria in the early 7th century, also known as John V of Alexandria. He gained his epithet from his unstinting generosity in distributing the vast wealth of the patriarchate of Alexandria to the poor and afflicted.

Saint John the Merciful, Patriarch of Alexandria, was born on Cyprus in the VII Century into the family of the illustrious dignitary Epiphanios. At the wish of his parents, he entered into marriage and had children. When the wife and the children of the saint died, he became a monk: strict at fasting, prayer, and love for a brother.

His spiritual exploits gain him renown, and when the Patriarchal cathedra-seat at Alexandria fell vacant, the emperor Heraclius and all the clergy begged Saint John to occupy the Patriarchal throne.

The saint worthily assumed his archpastoral service, concerning himself over the moral and dogmatic welfare of his flock. He considers it his main task is to be merciful and protective towards all those in need.

At the beginning of his patriarchal service, he ordered the counting of all the poor and downtrodden in Alexandria (which turned out to be over seven thousand men). To all those in need, the saint daily distributed food. Twice during the week, on Wednesdays and Fridays, he emerged from the doors of the Patriarchal Cathedral, he received everyone in need: settled quarrels and distributed alms. Three times a week he visited the sick-houses and rendered help to the suffering.

It this period that the emperor Heraclius led a tremendous army against the Persian emperor Chosroes II. It resulted in the Persians ravaging and burning Jerusalem, and taking a multitude of captives. The holy patriarch John ransom the captives with funds from the church's treasury.

The saint never refused suppliants. Twice the saint gave money to a merchant that had suffered shipwreck, and a third time gave him a ship belonging to the Patriarchate and filled with grain, with which the merchant had a successful journey and repaid his obligations.

Saint John the Merciful was known for his gentle attitude towards people. А certain citizen insulted George, a nephew of the Patriarch. George asked the saint to avenge the insult. The saint promised to reward the offender, in a manner that all Alexandria would see. This calmed George down, and Saint John began to instruct him, speaking about the necessity of meekness and humility, and then, having summoned the insulter, he declared, that he would release him from payment of a church tax on his land. Alexandria indeed was amazed by such a "revenge", and George learned the lesson in the teaching of his uncle.

Shortly before his death, Saint John through illness was compelled to resign his cathedra and set off to the island of Cyprus. Having arrived at Cyprus, in his native city of Amaphunteia, the saint in peace fell asleep in the Lord  (616-620).

John is commemorated in the Orthodox Church on November 12.