Icon of protection of the Most Holy Mother of God 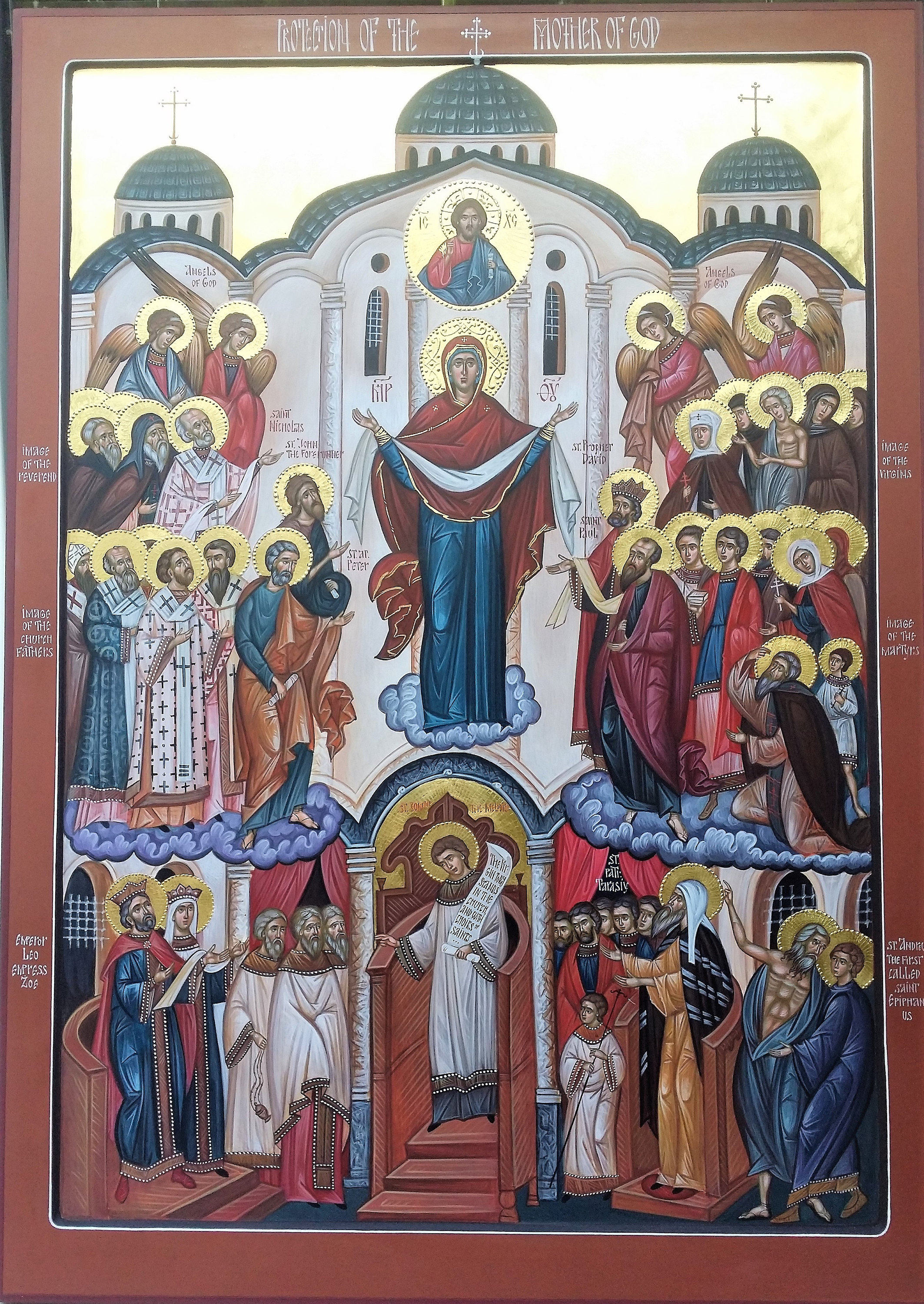 "Do you see, brother, how the Virgin Mary prays for us?

There were many temples in Constantinople. One of the most revered was the Church of the Vlakhernae (Blachernae), who was on the shore of the Golden Horn. Emperor Leo the Great built the Church in 458 after finding gold coffin decorated with precious stones, and the Virgin Mary's Veil, her head towel and part of her belt, to preserve these relics.  And there was a miracle: "Once upon a time in a church in Constantinople was an icon of the Holy Virgin, Before which hung a veil, but every Friday night  on its own and in a divine miracle, the Veil rising to the sky without any assistance, (so that everyone could see this clearly) and on Saturday the cover went down to its previous place and remained there until next Friday. "

It is supposed that this icon of the Mother of God was made of mosaic and was on the main altar of the Church of Vlakhernae. As early as 511, a night vigil with chants was found, and this service was made every week.

During the time of St. Andrei Yurodivuiy ( Andrei the "Holy Fool"), Byzantium experienced a difficult moment in its history. The Saracen troop invaded the Empire. Then, the Orthodox, together with the Emperor and Patriarch, gathered in the Temple of Vlakhernae at night vigil. The temple was surrounded by darkness, only the sound of the splashing of the waves in the bay violated the reverent silence. Everyone prayed:

- Our Lady Most Holy Mother, save us!

Together with all citizens was prayed and St. Andrei Yurodivuiy ( Andrei the "Holy Fool") and his faithful pupil.

Suddenly, the domes of the temple were disappeared, everything was lit in daylight, and Andrew saw the Heavenly Queen coming from the royal doors. The holy prophets, the apostles, and the angels who glorified the Mother of God with praiseful names were surrounded Her.

And they saw how Mother of God knelt and prayed for Christians from all over the earth, and lifted a shining, light-like cover from his head and spread it over the praying people. And the cloak became so huge that it covered the entire Orthodox world. St. Andrei asked his pupil:

And while the Virgin Mary was in the Church of Vlakhernae, its holy veil was clearly visible, and after she left, the shroud became invisible. The miracle took place on Sunday, October 1, when the Byzantine Emperor Leo VI Wise reigned.

Constantinople knew many testimonies about the wonderful protection of the Most Holy Mother and Her Protection. That same night, when She stretched His covering over the praying people in Vlakhernae, the Saracens fled. The dropped shirt of the Holy Virgin into the waters of the bay Golden Horn saved the city from the Scythians, a little later - the Agars, and in 866 - and from the raids, Askol and Dir and their troops.

The great Prince Andrey Bogolyubsky (1111-1174) established in Rus the Feast of the Holy Mother in the 60s of the 12th century and at the same time built the unusual beautiful Temple of the Holy Mother, right in the heart of his principality.

The earliest of the famous "Protection of the Most Holy Mother of God" icons date back to the 13th century.

Already in the next century, two main compositional and plot types of this icon have been established.

Moscow type depicts the marvelous vision with which Andrew and his pupil were honored;

Here the Most Holy Mother of God holds the Her veil in Her hands.

The Novgorod type of this icon  depicts

The Virgin Mary, who is portrayed in the posture of Oranta, with raised hands,

and the veil is in hand of Angels

- it is believed to be an image of the miracle that happened weekly in the Temple of the Vlakhernae.

Look at the icon. It can be read as a book - that's what our ancestors did. Take a look and see

At the center of the pulpit is the well-known Roman Sweet- singer with a scroll in his hands, lived four centuries before Andrei the Yurodivuiy (The Holy Fool). But Andrei is standing nearby - dressed in an old robe, pointing to his shocked pupil the vivid vision ... ..

By Roman Sweet- singer are the Byzantine Emperor, the Ecumenical Patriarch, the monks, the people, and above all the heavenly Church - the prophets, the saints, the martyrs ... . Among them are St. John the Theologian and St. John the Baptist.

The icon of the Protection of the Most Holy Mother of God has united everything - the heavenly and the earthly world. And right in the center of the icon is the Most Holy Mother, holding the graceful veil in Her hands. It is so vast that it freely covers the entire Orthodox world.

The liturgical phrase generally associated with the Pokrov is the kontakion for the feast, tone 3, generally found on the scroll held by Roman the Melodist:

“The Virgin today stands in the church, and with choirs of invisible saints prays to God for us.  Angels and bishops  venerate her, apostles with prophets rejoice because for our sake the Mother of God prays to the God before the ages.”